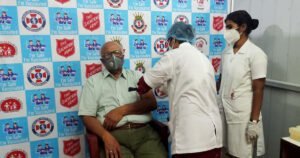 The Salvation Army across India is responding as daily recorded cases of COVID-19 reach unprecedented levels. The international movement operates a number of hospitals and clinics across the subcontinent. While Indian government policy has, in the main, been to deliver COVID-19 treatment through its own healthcare facilities, Salvation Army hospitals in several areas are now admitting large numbers of patients with COVID symptoms, as demand in the national system exceeds capacity.

The international leader of The Salvation Army, General Brian Peddle, has today written to Salvationists in India. He writes: “Your country and its people have captured the attention of the world due to the present surge of COVID and its impact upon families, neighbours and communities.”

Latest data from the World Health Organization reports a total of more than 17.6 million COVID-19 cases in the country to date. Highlighting the surge in cases affecting the country recently, the day-on-day increase in reported cases on April 26 was 352,911 individuals (a daily increase of more than two percent). The number of daily reported fatalities due to the virus is also at an all-time high. The General says: “Our hearts are moved, and I write … assuring you of our prayers and practical support.”

The General’s letter also bears witness to the strong service exemplified by The Salvation Army in India. He writes: “I am proud of the work being done at our hospitals and am hearing stories from your leaders of courage and great faith.”

A meeting of The Salvation Army’s International Headquarters COVID-19 taskforce this afternoon has discussed up-to-date situation reports from around the country. The team also considered what further steps could be taken to strengthen the response, building on the capacity improvements and equipping that have already been implemented.

In Maharashtra state, The Salvation Army’s Evangeline Booth Hospital (EBH) in Ahmednagar is one of relatively few non-government-run facilities that has been caring for coronavirus patients since March 2020. As of Friday, April 23, 2021, 160 beds were occupied by COVID-19 patients, with 50 requiring oxygen. While a number have been successfully discharged, a further 27 patients with COVID symptoms were admitted on Monday, April 26.

Hospital administrator Major Devdan Kalkumbe, shares: “EBH is giving 100 percent free treatment to COVID-19 Patients. At present EBH has 155 patients; 90 percent of patients are discharged when recovered and the local government appreciates what The Salvation Army is doing. Our concern is that the second wave is more serious and deadly [than the first], but the risk is that we don’t have enough oxygen for the higher demands.”

Local government has supported the hospital with the provision of some extra oxygen, with The Salvation Army’s International Headquarters providing an additional ventilator and essential personal protective equipment. Staff salaries are being supported here, alongside plans to assist with meals and transport – difficulties with which are particularly exacerbated where night curfews interrupt usual travel to work.

The Salvation Army also operates Emery Hospital in Gujarat state. The hospital here was ready to respond earlier in the crisis, but in the event was not called upon. This time, however, that preparedness is being put into action with 50 beds for COVID patients being fully resourced.
South

Catherine Booth Hospital in Nagercoil, at the southernmost tip of India, has been asked by the Indian government to accept up to 40 COVID patients. At the time of writing, 23 beds are occupied by people suffering symptoms of coronavirus, with more patients expected in the next few days as the situation worsens.

With patients unable to receive visitors, Salvation Army workers are endeavouring to provide meals and other essential support, as well as the therapeutic care itself.

Clinics serving smaller communities in Putencruz and Kanghaza have not seen a surge in COVID-19 locally and are currently not anticipating a major role in the COVID-19 response.

Although primarily an ophthalmic specialist, MacRobert Hospital in Dhariwal, Punjab, has worked hard to prepare a 150-plus bed capacity facility for COVID patients that would reduce pressure on nearby government provision. The well-established nurse training program here has also been put to good effect, with groups of 10 student nurses going out into the rural community around the hospital to undertake PCR testing and carry out other health checks. Salvation Army clinicians have also supported the government in its roll-out of the local COVID-19 vaccination campaign.

From a national perspective, Colonel Lalhmingliana, India National Executive Officer, says: “At present, what we can do is bring hope as a reality to the people who are losing hope.”

The General’s letter to Salvationists in India affirms this with a quote from Joshua 1: “Be strong and very courageous.” He also reiterates the importance of cooperating with government public health instruction and following sound hygiene practices. “I have had my vaccination,” writes the General, “I encourage you to receive yours.”