Back To All Stories

Let’s Chat! is a conversational series where we are in conversation with some of our remarkable volunteers and seasonal staff about their experience with The Salvation Army and our Ministry Unit, Boundless Vancouver. Read along as we deep dive into who they are and how they found their community here at Boundless Vancouver 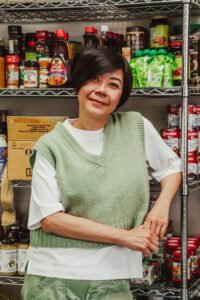 Debby has a charm and energy like no other. Cheering through our halls and helping our team out for around a year now, we had to get in conversation with her about what keeps her spirits so high and makes her choose Boundless Vancouver to be her community.

A little bit about her: Debby was born in Taiwan. She moved to San Francisco with her family at the age of 13, where she finished her schooling. Later, she moved back to Taiwan for work, after which she was offered a job opportunity that brought her to Banff, AB where her bilingual skillset was impactful in the booming tourism industry. Eventually, she moved to Vancouver, BC. She has a very close relationship with her parents which is what encouraged her move to Vancouver. “I moved to Vancouver because it’s relatively closer to my parents, compared to Banff. They moved back to Taiwan so it’s closer for me to get there! I only need one flight, it’s 13 hours from Vancouver through a direct flight to Taiwan.”

Before volunteering for The Salvation Army Boundless Vancouver, she worked for a law firm in the city alongside her other commitments. “I’m sort of semi-retired because of my personal health issues/ surgeries which has opened up some time for me to help out and volunteer here!”

Her desire to volunteer began through her experience of watching volunteers and staff care for her mother at a care home. “It was so fascinating how the volunteers and staff treat them no matter who you are. The doctors, nurses and even the support staff seem to make the system work to create such a welcoming space for my mother, and this was truly so amazing. It really opened my eyes. Just doing small things like playing Bingo or Mahjong to keep the seniors company means so much to them.” She said as she referred to the well-oiled system of senior care homes. She saw value in every piece of the puzzle that made it a whole picture of caring for more than just yourself and making someone’s day. After her mothers’ passing, she found herself thinking of how she could return the gracious care and support that was provided for her mother.

Debby previously volunteered for a church in Downtown Vancouver, where she assisted in preparing dinners for neighbours, which has been closed now due to COVID-19 restrictions. This was her first experience being a volunteer and had a strong urge to keep up with it. Via some connections in her network, she found herself helping out at The Salvation Army Boundless Vancouver during May 2020. Debby started her volunteer journey with our team in May 2020, where she helped the COVID-19 Relief Hamper program. After which, she joined our seasonal staff team as a Caseworker during the Christmas season. “Gaining the trust of the staff team here, and being allowed to lead a group of volunteers within the first few weeks of volunteering made me feel empowered, and not just like a volunteer who is expected to get the job done. The team is so welcoming – I couldn’t have asked for a better space to be myself and express myself, while doing God’s work!”

When asked about what makes her the happiest about volunteering with us, she expressed “ I’d say the ability to help people out, and the feeling of being a part of something bigger makes me so happy. In addition to that, I believe that God sent us to come here to do His work. To let people know we bring the love and that we are they for them when they need us. People have good days and bad days and sometimes it’s easy to forget what we are grateful for, and what is our larger purpose of our work. Coming from a cut-throat corporate law environment, I don’t get to see a lot of compassion and kindness. The other day, a neighbour struggling with homelessness came here during my volunteer shift asking for some food. On his way out, he donated to $5 even though he was struggling financially – he wanted to give back to the work that is done here. That was the only money in his pocket! This really touched my heart. Because of being in the courtroom for years, I’ve been trained to not trust people easily because everybody lies and is out for themselves. But ever since I’ve been volunteering here, I’ve had the blessing to see the capability of human kindness and compassion. It’s like a breath of fresh air!”